There’s no doubt there are plenty of quality surgeons in the Houston area. But Dr. Brian Harkins has found plenty of ways to not only stand out as a skilled surgeon but also as someone who remains fully focused on making the medical community and his region a better place.

Dr. Harkins is considered one of the top laparoscopic surgeons in the country and has helped thousands of patients for more than 30 years by treating them for a wide variety of diseases and conditions, from cancer to hernias. He also is a pioneer in the area of robotic surgery, which offers health care providers even more tools to help patients and minimize their pain and recovery time.

When filling out your ballot for Living Magazine’s “Best Of” for 2019, consider voting for Dr. Harkins in the “Top Doc” category. Each year, thousands of readers vote in the annual survey of favorite people, places, and things in our community. Sometimes only a few votes end up separating the finalists, so this is why every vote is critical!

Dr. Harkins, an Air Force and Army veteran and father of four, has been living and performing surgery in Texas since 1997. He’s an independent affiliate of the Surgical Advanced Specialty Center since it opened its doors in 2002, and helped design and build its current office in 2003. He’s held multiple leadership roles there over the years and currently is a member of the facility’s board of directors. He’s also the chair of the robotics committee at Tomball Regional Medical Center and a fellow at the American College of Surgeons.

Part of his specialty is robotic surgery, using the innovative da Vinci Xi robotic system, which is a small surgical device that a surgeon controls remotely. The robot can reach areas and perform precise tasks in areas that are sometimes difficult for human surgeons to reach easily. This can lead to better outcomes as well as smaller scars and shorter recovery time

Dr. Harkins was born in Tennessee and married his high school sweetheart in 1978. They have four children.

His military service first took him to North Dakota where he was a nuclear missile mechanic during the day and studied at night. He later transferred to LSU in Baton Rouge, where he earned his Doctor of Medicine and the Dean’s Award in 1989.

Following graduation, Dr. Harkins began a general surgery residency at Eisenhower Medical Center in Augusta, Geo. There, he was honored with the award of “Outstanding Laparoscopic Resident-Surgeon,” and was commended for a scientific presentation from Georgia’s chapter of the American College of Surgeons. He later received the Outstanding Graduating Resident Award along with the Army Commendation Medal for Meritorious Service for his role as the chief of the Department of Specialty Care at Noble Army Hospital.

After retirement from the military, he moved to Texas in 1997, where he and his family have enjoyed living ever since.  He’s been interested in robotic surgery so he found a way to bring it to the Tomball area. He and his staff offer a comfortable and friendly setting, which appeals to patients from around the country.

When he’s not helping pioneer the future of robotics to help health care, Dr. Harkins enjoys spending time with his family, building things and the outdoors.

He’s honored to be listed among the other nominees for Living Magazine’s “Top Docs Showcase,” and appreciates everyone who votes for him.

Casting a vote is as easy as visiting www.livingmagazine.net/. The deadline to submit ballots for 2019 is 12 A.M. March 15.

The Lesson From the Robotic Prostate

Something about this new minimally invasive platform made it work for complicated surgery that couldn’t be duplicated on the mature laparoscopic platform. Many urologists recognized these beneﬁts and a new gold standard emerged.

By 2013 robotic prostatectomy was clearly the new gold standard. Hysterectomies for malignancy have also seen this transition to a new standard. (Premier Data 2003, 2005, and 2013) These procedures represent a recurring history lesson where open surgery predominance was replaced by robotics completely bypassing any sort of laparoscopic phase for the procedure.

In 2013, despite being 25 years into the laparoscopic era, colectomies and incisional hernias both have seen only about a 1/3 penetration of laparoscopy despite proven beneﬁts for patients.

The latest robotic advanced platform, the Da Vinci Xi, shows promise to ﬁnally take colectomies, inguinal hernias, and incisional hernias along the path of the prostate to a new gold standard as a robotic surgery!

This phenomenal growth has been fueled almost completely by the surgical community. Hernia thought leaders throughout the surgical community have recognized the increased capabilities of the robotic system allowing a dissection with more precision and less pain. This is in part due to the increased dexterity of the wristed instruments and to the incredible 3-D magniﬁed high-resolution view of the robotic system.

Many studies in this emerging era of robotic hernias are showing improved quality metrics, patient satisfaction, and improved total cost of care and value over other techniques.

This past October the American College of Surgeons held its annual national conference in Washington DC. Dr. Harkins was honored to have the opportunity to share his experience with his colleagues in a guest lecture event where he chronicled his adoption of the “emerging” standard of laparoscopy in the 1990’s and how that closely parallels his, and the surgical community’s, current adoption of the new emerging standard for robotic surgery.

He continues to provide surgeons across the US with case observations, proctoring and acts as a colon and hernia robotics course instructor on a regular basis. In a separate event, Dr. Harkins will return to Washington DC as a guest instructor for the World Wide Sales Meeting of Intuitive Surgical.

He will lecture on robotic right hemicolectomies and then help the attendees experience the performance of the procedure on an issue model. While he enjoys sharing his experience with his colleagues, Dr. Harkins is most pleased to provide the latest in advanced surgical care available today to the patients of northwest Houston!!! 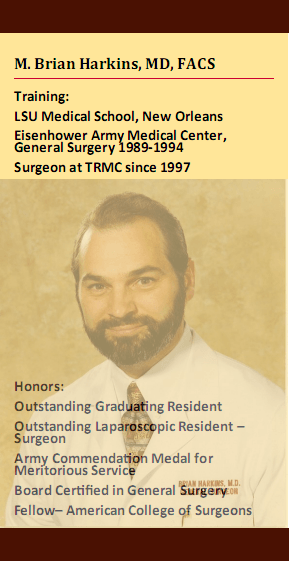